Native Hawaiian Entrepreneurs Get A Boost From E-Commerce Giant Shopify

Kea Peters, a Native Hawaiian illustrator and designer, was on the last flight from California to Honolulu before the pandemic basically shut down travel in March 2020. Over the next 14 days, quarantined in her room, she thought of all the people feeling the same sense of isolation and decided to take her creativity online. 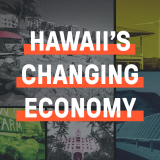 She filmed live tutorials on Instagram, teaching viewers how to draw native plants, create letterheads and put together do-it-yourself crafts. By the end of the year, she had started a business called the Kakou Collective.

Peters grew her social media following from a few hundred to 10,000 in nine months as she began selling her native plant-inspired stickers, stationary and washi tape online — eventually joining the Mana Up business accelerator program in 2021.

“As my following grew, I learned that people really want to feel connected to Hawaii and they need a place to express themselves,” Peters said. “This community is a really cool way to just allow people to express what they want to in an artful way.”

Now, she’s decided to take part in a new program, Hawaii Rising, a collaboration between Mana Up and Shopify Inc., the second largest e-commerce platform behind Amazon.

The eight-month-long program launched in February and allows self-identifying Native Hawaiian, Pacific Islander and any other Indigenous entrepreneurs to get their product, service or conceptual business up and running on the Shopify platform.

Mana Up co-founder Meli James said that innovation was essential for businesses during the pandemic since they had to learn new ways to reach consumers when the number of tourists plummeted.

“As we look to diversify our economy, we’re looking to create opportunities that are not so tied to tourism,” she said.

This is part of a growing trend. While many local businesses struggled to get by during the pandemic, others were able to successfully transition online or start business endeavors, finding new customers beyond island borders.

Businesses that took part in Mana Up’s accelerator programs experienced a cashflow boom, with 53% making their highest revenues in 2020, according to James.

The state also recorded a nearly eightfold increase in taxable income from online sales, about $25 million in January 2019 to $183 million by December 2021.

"E-commerce definitely raises the presence and helps connect our made-in-Hawaii brand on a national and international scale," said Sherry Menor-McNamara, president and CEO of the Chamber of Commerce Hawaii. Menor-McNamara said it also gives tourists a chance to continue purchasing products discovered during their visits.

So, how does Hawaii Rising differ from previous Mana Up accelerator programs? It's creating a designated space for Indigenous businesses in the islands on Shopify's platform.

While the company hardly seems like an anti-capitalist underdog with total revenues of $4.6 billion in 2021, Shopify prides itself on its ability to cut out the middle man by enabling merchants to ship directly to buyers.

This way of shopping became extremely popular during the pandemic when supply chain issues caused major backups for businesses nationwide.

"It's all about reciprocity, lifting one another up and knowledge sharing, because historically, there's (been a) lack of access to these resources, lack of access to capital and talk of having imposter syndrome when you go through programming that's not specifically for you, or doesn't relate to your culture in any way," Ridler said.

The Hawaii Rising program offers participants free, six-month access to a Shopify advanced account, eight in-person or virtual workshops and access to Shopify's Build Native community. Applicants must be Hawaii residents, self-identify as Native Hawaiian or Indigenous, have a desire to sell online, give the program their full participation and have a product, service or conceptual business.

That said, applicants have a range of experience.

Blaine Apo, owner of Maui Crisps, said he started selling his jerky in 2014 in the back of a gas station. He joined Mana Up's accelerator in 2019, doubling production to 12,000 package of crisps per month.

Now he's joined the Hawaii Rising program to grow his consumer base.

"We really gear toward one specific customer, which is people that buy for omiyage gifts, so we're trying to find different demographics and reach new customers," he said.

Apo said he hopes to expand his production to the mainland and fully automate the production process.

Meanwhile, 14-year-old Coen Cadinha is just starting his business. Four months ago, he made li hing mui gummies to sell at school.

He quickly sold out and used the money to buy more — eventually coining his business: Big Boy Sweets.

Cadinha now sells his sweets at pop-up markets in Waikele on weekends, but does not yet have a certified kitchen that would allow him to sell his products in local grocery stores.

He said that he's hopeful this program will help him mobilize his ideas, eventually dreaming of Big Boy Sweets vending machines placed across Oahu.

"I didn't think I could do it because there are so many big-time businesses here, but my aunty told me to apply and I got it! It's crazy," Cadinha said.

Cadinha was one of the latest additions to the Hawaii Rising program that began Feb. 10. While the program is already in full swing, Mana Up still encourages interested entrepreneurs to apply before the second workshop in March.

“Hawaii’s Changing Economy” is supported by a grant from the Hawaii Community Foundation as part of its CHANGE Framework project.